Arduino - Sending data over a CAN bus

I have been tinkering with CAN buses due to my interest in cars. It's fascinating to me that packets are flying around a modern vehicle controlling nearly everything. Gauges, lights, locks, engine sensors, etc. To have a better understanding of the basics of a CAN bus I wanted to build the simplest possible setup to send and receive CAN messages. I chose two Arduino Uno's with a Seeed Studio CAN-BUS shield attached to each Uno. The Seeed shield is very straight forward and inexpensive. The Sparkfun CAN-BUS shield has an SD card slot, LCD connector and GPS connector. All of which are cool but drive up the price and complexity. The Seeed shield only does CAN bus and includes screw terminals which are handy for testing.


What I wanted to do with this experiment was transmit the value of an analog pin hooked up to a linear potentiometer. The data would be sent from one Arduino to another over a CAN bus and then display that value on an LCD connected to the second Arduino. Here is a picture of my setup. (Ignore the Mega2560 above the LCD. It's not used here.) 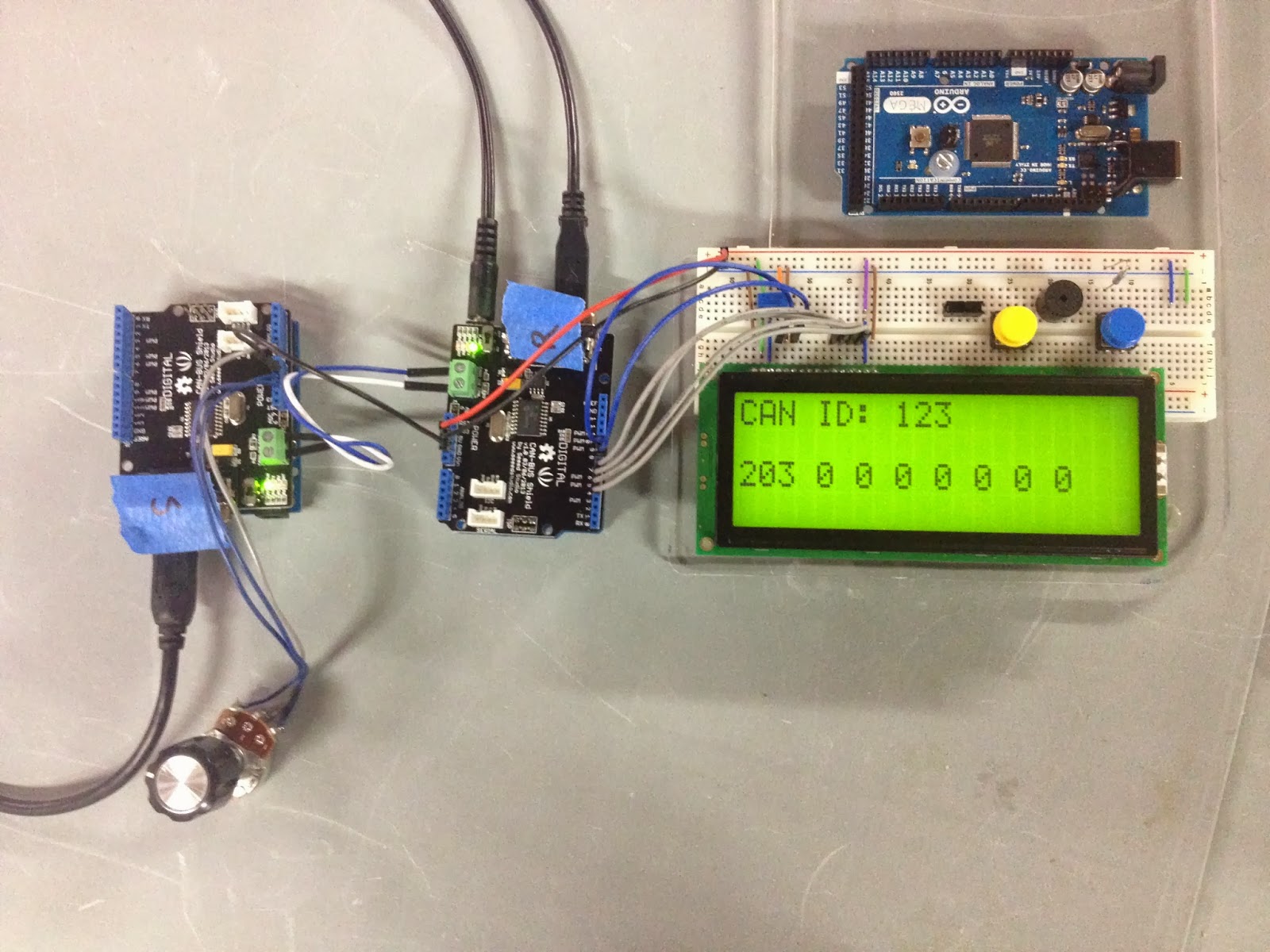 And here is a Fritzing diagram minus the CAN-BUS shields.

**Note: I have recently discovered the Seeed Studio CAN-BUS shield v1.0 uses a 60 ohm termination resistor for R3. While that worked for this small demo I later ran into issues when trying to use this shield with other nodes on a CAN bus. This 60 ohm resistor caused me many hours of frustration. If you are going to use this shield with on a bus with multiple nodes I would recommend desoldering R3 and using the correct 120 ohm resistance at the ends of your bus.

Connecting into an existing CAN bus

Another important step is to connect a common ground between your Arduino board and the vehicle. If you are connecting at the OBD2 port pin 5 provides a signal ground. If you can't find a signal ground wire a chassis ground will suffice.

So I should probably explain a bit about CAN bus messages. Each message is made up of an id and some data. The id's in hex start at 0x000 and go to 0x7FF or 0 to 2047 in decimal. In most systems lower id values are considered more important. The bus handles collisions by letting the lower id win the collision. The data can be between 1 and 8 bytes for each message. Each byte can have a value from 0 to 255 or in hex 0x00 to 0xFF. When you send a CAN bus message you transmit the id, how many bytes you are sending (this is called DLC) and the actual data. The receiver will only read the number of bytes you said should be in the message. So if you send a DLC of 4 but the message contains 8 bytes the receiver will only read the first 4 bytes. Eight bytes per message is a bit limiting but the tradeoff is the high reliability of the bus. So sometimes you have to be creative with stuffing data into those bytes. If the value you are sending is less than 255 you can just use a single byte. Larger numbers will require using multiple bytes. Ascii codes can be sent but only eight characters per message. Whatever method you use to stuff the data in will also have to be used to un-stuff the data on the receiver. In my simple example here I did some math to limit the range of values to 0-255. An analog pin produces values between 0-1024. I simply divided the result by four to give me data I could send in a single byte.
CAN buses can operate at several different speeds up to 1 Mbit/s. Typical rates are 100 kbit/s, 125 kbit/s and 500 kbit/s. Slower rates allow for longer length buses. All devices on a bus must transmit at the same speed. The CAN bus wikipedia page is a good place to start if you want to learn more about the CAN protocol.

I started with the example code provided by Seeed and modified it to add in the LCD output on the 'receiver' device and added reading of the potentiometer on A0 for the value that is transmitted. They have basic examples for send and receive. You can find some good info on their wiki page. Their libraries are available here. On my Mac I created the directory ~/Documents/Arduino/libraries/CAN_BUS_Shield for the library files. I unzipped the file and copied over the .h and .cpp files into that new directory. The zip file also contains the send and receive examples.

Note that normally devices on a CAN bus are both receivers and transmitters of data. This is a simplified example where each device is only doing one task.


Posted by Matthew McMillan at 5:04 PM

Email ThisBlogThis!Share to TwitterShare to FacebookShare to Pinterest
Labels: Arduino, CAN, electronics

Please note all comments are moderated by me before they appear on the site. It may take a day or so for me to get to them. Thanks for your feedback.